The GPL v3 Watch List is intended to give you a snapshot of the GPLv3/LGPLv3 adoption for February 23rd through February 29th, 2008.

February 29th - Leap Ahead
Today, on this wonderful leap year, we have hit another milestone. Combining the GPL v3 and LGPL v3 numbers, the new versions of the licenses have now accumulated over 2000 projects that have adopted the license. The current GPL v3 count is at 1841 GPL v3 projects, an increase of 58 GPL v3 projects and the LGPL v3 count is up 3 LGPL v3 projects, bringing it to 176 LGPL v3 projects. Combined they account for 2017 projects that are either GPL v3 or LGPL v3. Up to this point we still have not seen any slow down in project adoption. Many new projects are choosing the GPL v3 or LGPL v3 to be their license for their infant projects, possibly due to the fact it is the newest version of the largest license in the open source community, regardless of the details of the terms. Our next milestone will be 2000 projects that are just GPL v3. We will report that milestone when we hit it, which is expected in the next month. 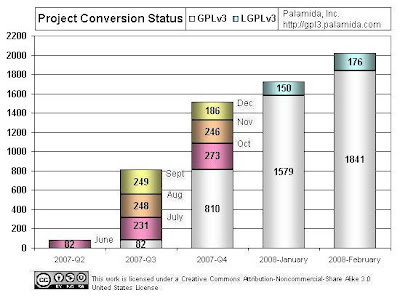 New project conversions this week include:
Story of the week
Public Domain
In a recent article on CNET News, they brought up a licensing question that I had myself, "Is public domain software open- source?" The blogger, Stephen Shankland, interviewed various lawyers and not surprisingly they had mixed answers. A few of the lawyers said that, yes it does fit into the definition of open-source while other lawyers such as Mark Radcliffe said public domain software cannot "impose the terms necessary to comply with any of the open source licenses". By the very definition, public domain requires no license, so it cannot be a part of the OSI which regulates open-source licenses. But the confusion is easy to fall into because if public domain software offers source code, it fits the definition of open-source.

The importance of this article is it is crucial for those who would like to contribute to the open-source community to understand what it truly means to be open-source. I have run into various projects that consider themselves free and in the public domain, but do not offer the code required to be open-source. They do not follow the terms set out by the OSI and their licenses, which can cause problems if their work actually does end up in another project. Just posting code onto a server is not enough to contribute to a world governed by laws. It is important for developers to take legal responsibility for their work and choose a suitable license. However, I may be preaching to the choir, since those of you who actually care enough to track GPL v3 numbers are most likely knowledgeable of open-source licenses anyways.

Notable Mention
Palamida actively takes submissions from visitors on updates on new GPL v3/LGPL 3 projects. We are amazed at the number of submissions we have gotten to date, but even more so, we are incredibly grateful to the almost 100 core contributors who have devoted their time and resources at helping us provide up-to-date information.

Publication
If you have a need for licensing statistics related to free and open source software, please contact us with details at rdgroup@airius.com.